In the shadow of skyscrapers, billboards and broadcast towers, in the midst of America’s most populous city, there’s a community where children grow up with no TV. They don’t eat McDonald’s burgers, watch movies, read magazines or listen to the radio, and they spend long hours studying religion. No, they’re not all grounded.

Crown Heights is home to a large Chassidic Jewish population, whose way of life sometimes seems like something out of 19th-century Eastern Europe. ‘Cultural tours of Chassidic New York’ seeks to demystify the community and its customs to outsiders. Rabbi Beryl Epstein, who leads the tours, came to Brooklyn from ‘the holy land of Tennessee’ at the age of 18. If you listen closely, you can hear the vestiges of a southern drawl somewhere in his voice. He says that when people ask him if there are Jews in Tennessee, he replies, “Not since I left.”

A joke-telling, Southern-transplant rabbi may not be the first thing some outsiders would expect to find in this community, and that’s one big reason Epstein is so enthusiastic about leading these tours. “I think fear of the unknown is the greatest fear,” he tells us more than once. “There are so many misconceptions” about Chassidim, he explains, “and misconceptions keep people from being together.” He wants to share the traditions of his community with others to encourage tolerance and to show people why Chabad Lubavitch—the specific Chassidic movement to which he belongs—follows ancient traditions in modern times. Photo by:  Matthew Rutledge, Creative Commons Attribution Licence
Epstein has a warm personality. He shakes the hands of men arriving on the tour and politely explains to the women that his religion forbids him to shake theirs. The tour’s guests, on a Tuesday afternoon, include an Australian, an Israeli couple and a group of German college students, along with a smattering of Americans. The rabbi says the tour is different every day, “it’s all interactive and in real time.” As such, he asks everyone where he or she came from and what he or she wants to learn.

After a lecture during which Epstein shares the basics of Chassidic life in Brooklyn, the first stop is Hasofer, where scribes work on Jewish holy texts. We climb a narrow staircase to a room where workers repair Torah (Bible) scrolls. Epstein tells us that each scroll is made from roughly 60 animal skins and is about 200 ft long. They’re written with the feather of a kosher bird, and the process is arduous. For each letter, the scribe must “look at it, say it, write it,” explains Epstein. “It takes a long time,” up to a year. “If any two letters touch, it invalidates the whole scroll,” Epstein says. To seek out such mistakes, the scribes scan scrolls using a computer program. They then scrape off and rewrite any offending characters.

In another room within the same building, scribes make tefillin—the leather black boxes and straps that observant Jewish men use during prayers from the time they’re 13 years old. Epstein calls them “spiritual transmitters and receivers.” Inside each box, there’s a small scroll inscribed with Torah passages, a metaphorical “battery pack that makes it run.” 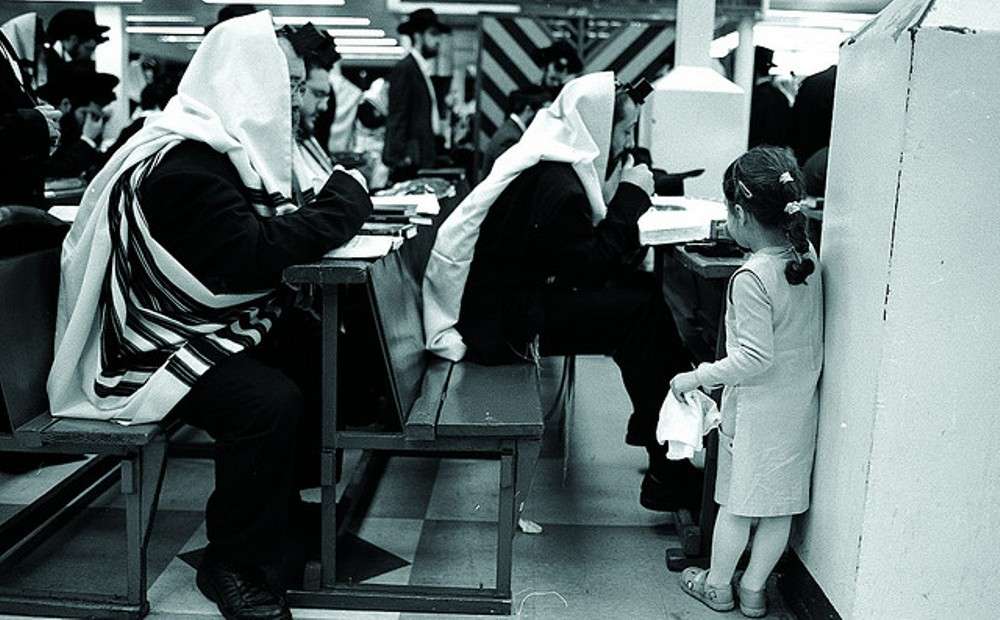 Photo by:  Smart Destinations, Creative Commons Attribution Licence
Our next stop is a synagogue, Chabad’s world headquarters. The huge facility includes separate levels for men and women, and there’s a constant buzz of activity. It sounds like a high school cafeteria as worshippers put on tefillin, sway, study and talk. Usually, there are five or six services taking place at a time in the building. Epstein says that many of the students here are from other countries. “From the time you’re 18 to 20,” if you’re part of the Chabad movement and want to become a rabbi, “you leave your country to go study somewhere else.”

“Other Chassidic groups,” says Epstein, “tend to stay within themselves,” but part of Chabad’s mission is to inspire others (not, he takes pains to say, to proselytize—in fact, he says, they try to make converting difficult). After the synagogue, Epstein takes us to the mikvah—a ritual bath. While the mikvah is used at times by men, Epstein focuses on its role in helping women achieve ‘purity’ within the context of marriage. The bath is supposed to be filled with ‘living water’—for example, rain—but because “there’s no Chassidic rain dance,” he says that in reality some living water is kept below the tap water that fills the rest of the tub. 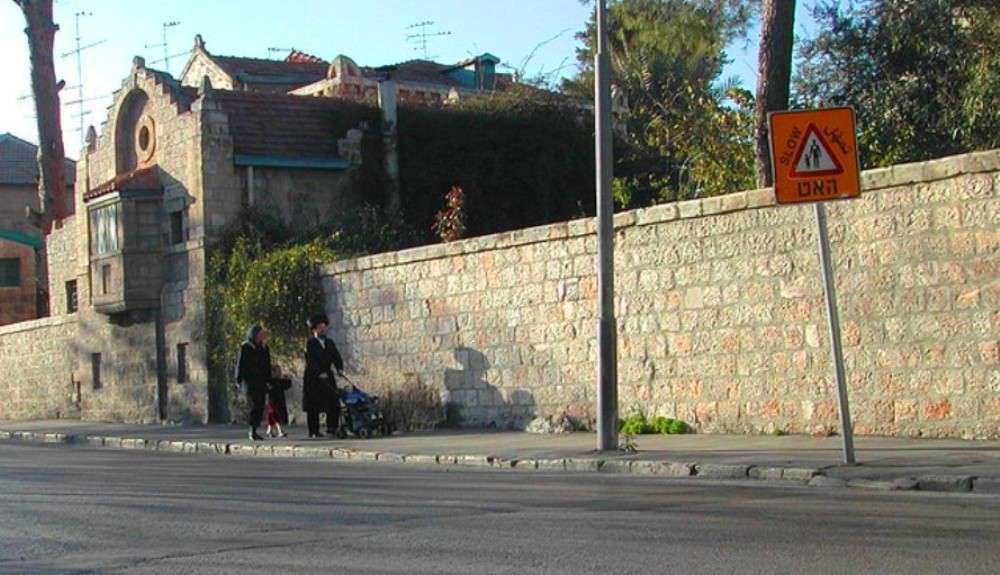 Photo by:  Creap, Creative Commons Attribution Licence
Epstein also takes this opportunity to discuss Chassidic Jewish marriages. Quotes like “if you’re looking for a person to make you happy, that’s too big of a job for the other person” make this part of the tour a bit like stepping into a cross between a religious service and an episode of Dr. Phil. He cheerfully fields inquiries about how to date without being able to do so much as hold hands.

The rabbi jokes about the extensive set of rules governing when Chassidic husbands and wives may and may not touch, designed to prevent contact at forbidden times. “If you want to know how to be romantic,” he advises, “do the opposite.” One example—at times, married couples are not allowed to “eat potato chips out of the same bowl.”

Passover is coming up, so next we enter the Lubavitch Matzah Bakery, where the process of turning flour and water into matzo—unleavened bread—must take 18 minutes or less, or else it won’t be kosher for the holiday. Inside, everyone races to get the job done. In a room where workers roll out the dough, no pictures are allowed. I ask Epstein whether this is a religious restriction. It’s not.

The women who work in this room emigrated from the Soviet Union 35 or 40 years ago. “As far as they’re concerned,” Epstein says, “the KGB is still on the loose” and will persecute them for making matzo. They can’t be convinced otherwise, and they have an intense fear of cameras.

After the dough is mixed and rolled, it goes into a 1200-degree wood-and-coal-burning oven, which cooks it in about 15 seconds. It comes out charred. “Undercooked, we cannot eat,” says Epstein. “Burnt is better.”

Later in the tour, as we’re walking outside, Epstein shows us a Sabbath alarm, towering over the neighbourhood, which goes off 18 minutes before sunset on Friday night—at which time women must return home and light candles in honour of the Jewish day of rest. Asked whether others in the diverse community mind the alarm, he says it’s not an issue. “We have our alarm, they have their block parties,” he says. “We get along.”

After a stopover in a Judaica store, whose shelves are filled with yarmulkes, religious texts and even novels and music (Epstein says that the arts are encouraged in the community, so long as they’re ‘positive’—meaning, to him, no to Madonna but yes to Matisyahu), the group heads to Mendy’s at the Jewish Children’s Museum. Kosher lunch includes staples such as knishes, falafel and matzo ball soup. During the freewheeling discussion over the meal, there’s no question Epstein won’t answer. Few people would share all of the Chassidim’s views, but the rabbi’s candour helps to achieve his goal of dispelling misconceptions and fostering tolerance.

One tour participant, who came in with no knowledge of the Chassidic community, voices her gratitude as the afternoon comes to a close, “Thank you for sharing all this with the goyim.”