New York (CNN) – When he was 18 and still living in his hometown of Chattanooga, Tennessee, Beryl Epstein received a call from his older brother, Mordechai, who was about to join the Israel Defense Forces.

Mordechai urged his younger brother to come to Crown Heights, a largely ultra-Orthodox Jewish neighborhood in Brooklyn, New York, where he was studying before heading to Israel.

“I knew there must be more – something I was missing,” recalls Epstein, 53, who grew up in a secular Jewish home.

His visit to Crown Heights the following year, 1977, inspired him to move there and to join the Chabad Lubavitch, a Hasidic Jewish sect predominant in the neighborhood. Inside his new community, Epstein noticed there was a misconception among outsiders that Lubavitcher Jews – who are distinguished by dark clothing, frequent use of Yiddish and what they say is an unyielding focus on devotion to God – shun the outside world.

“I felt there was such a need to acclimate society to Hasidic Jews,” he says. “It’s one thing to have people speak about Hasidim. It’s another to have Hasidim themselves speak.”

Since 1982, Epstein has helped to bridge his community and the rest of the world by leading more than 200,000 New Yorkers, tourists, scholars and others on his Crown Heights walking tours.

With four other guides, Epstein runs the three-hour, $36 tours through an organization he founded called The Chassidic Discovery Welcome Center.

The men, who spend hours each day studying the Torah and Torah commentary, walk briskly between home and synagogue for morning, afternoon and evening prayers. 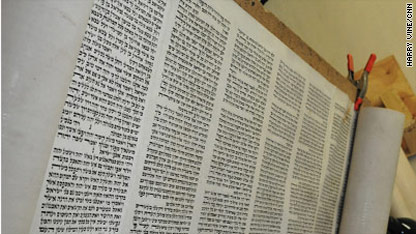 A torah is displayed in the workshop of a scribe.

Epstein calls this seeing “people living in a natural habitat.”

The neighborhood’s women wear long skirts and long-sleeve shirts, revealing as little skin as possible. Married women cover their heads with hats or scarves, and some wear wigs, following Jewish laws of modesty.

Still, signs of modernity are commonplace. 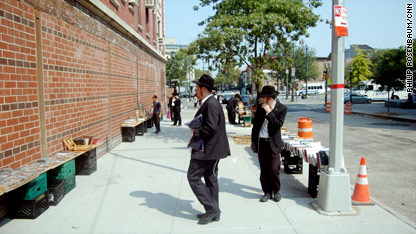 Men examine religious books and CDs on Kingston Avenue in the heart of Crown Heights.

The first stop on the tour is the neighborhood’s main synagogue. Dissonant voices carry through a large room as men and their sons pray, read and chat.

One man pulls out his iPhone. Chabad, which is headquartered in Crown Heights and is well known for running Jewish study centers around the world, has eagerly harnessed technology to spread its message. The synagogue’s activities are streamed live on the Internet at http://www.770live.com. In adjoining classrooms, lessons are digitized for students to download.

Sitting in the second-floor women’s gallery, the tour group watches the action below, snapping photos and asking questions while a young woman prays silently just a few feet away.

The synagogue and school, or yeshiva, are part of the building known as “770,” which refers to its address at 770 Eastern Parkway.

The building also houses the office of the Lubavitcher rebbe, Menachem Schneerson. The Chabad movement’s spiritual leader, Schneerson died in 1994 and has not been succeeded.

A replica of the 770 building, constructed of bricks from the same quarry, stands in Israel. “This is the community center. This is life,” Epstein says. “This is where the mundane becomes holy.”

In a nearby building, the tour group watches scribes write and restore Torah scrolls, making every effort to avoid a slip of the hand.

Although it takes almost a year and 60 kosher animal skins to write all 200 columns of a Torah with a feather and kosher ink, Epstein says a computer program can scan the scroll’s 304,805 letters for mistakes. Any errors, including illegible letters or two letters touching each other, can render the scroll inaccurate, which means it’s not sacred.

Downstairs, the scent of paint and varnish permeates a small room where men make tefillin, small black boxes containing Torah verses that Orthodox Jewish men 13 and older wear during morning prayers. One box is put on the head and another on the arm, using leather straps.

Epstein addresses questions from the group, which includes curiosity seekers from nearby and as far away as Texas and South Africa. The tourists say they were intrigued by what they read about the tour online and in guidebooks, as they seek off-the-beaten-path experiences. They ask about everything from the definition of “kosher” to the role of women in ultra-Orthodox Judaism and even what Hasidic Jews do for fun. 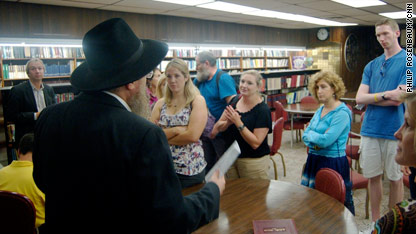 Rabbi Beryl Epstein speaks with the tour group before hitting the streets of Crown Heights.

Epstein answers with a smile and sharp wit, his body swaying back and forth in the same way Jews sometimes do when enveloped in deep prayer.

“Don’t read everything in here, or I won’t have anything to say today,” he jokes when the tour ducks into a library with thousands of religious books in Hebrew.

Epstein peppers his talk with life lessons and anecdotes on relationships, family, spirituality and parenting, including the fact that Hasidim do not watch television or follow the news very closely. They say they’re keen to avoid exposure to negative messages from secular culture, especially violence, sex and gossip, which is forbidden under Jewish law.

Members of the community hear about important events like last month’s Hurricane Irene, Epstein says, by word of mouth.

Later, the group crowds into a mikvah, a ritual purifying bath in a building nestled among a row of brownstones. Although it translates to “pool” and looks like a large bathtub, a mikvah is not for swimming or bathing; one must be clean before immersing in one.

For some men, mikvah is an infrequent ritual, while others use it every day before morning prayers. Women are required to submerge in the mikvah at the conclusion of their menstrual cycle, before resuming intimate relations with their husbands, as well as after childbirth. Using the mikvah is also an essential step in converting to Judaism.

On the way back to 770, Epstein gestures across the street to an empty parcel of donated land, where he hopes to someday build a visitor and learning center to help educate outsiders about the Lubavitcher movement.

“My goal is not to create a museum,” he says. “It’s not about the past – it’s about what’s going on right now … an immersion in Jewish living history.”

He has fostered the idea since the 1991 Crown Heights riots, when violence erupted between the neighborhood’s African-American and Jewish communities. August marked the 20th anniversary of the three-day riots, which ignited after a Jewish driver in the rebbe’s three-car motorcade accidentally struck and killed a 7-year-old black child, Gavin Cato.

Hours later, an Orthodox doctoral student from Australia was fatally stabbed by a mob of young men.

Two decades later, New York as a whole has transformed into a generally safer place, including Crown Heights with it. Still, occasional tensions linger.

“The greatest fear is the fear of the unknown,” Epstein says, “and I knew that if people knew what was going on here, they would feel connected to it rather than fight it.”

At the end of the tour, the group eats lunch at a kosher deli. Epstein takes out his Flip Cam to record everyone’s reflections, which he compiles into a short keepsake video.

“I’m coming away with a lot of questions, but a lot of answers, too,” says Irene Broussard of Austin, Texas, as she finishes her meal. “I want to wipe away my ignorance about religion.”

On another recent tour, a classical recording artist from Clearwater, Florida, said he was inspired to work his Crown Heights experience into his music.

“I felt like crying at 770 because I could feel the love and sincerity of what was happening,” Epstein says.

Epstein says this kind of response is his greatest reward.

“My hope is for people to incorporate a little bit of this community back into their own lives.”